Downer EDI Limited (Downer, ASX: DOW) announced today it was expanding its relationship with Fortescue Metals Group (Fortescue, ASX: FMG) through the provision of Early Mining and Maintenance Services at the Eliwana iron ore mine, located in the Pilbara region of Western Australia.

This is the second Eliwana project package to be executed by Downer, the first being the Bulk Earthworks contract which commenced in late 2019.

The new agreement is valued at approximately $450 million over five years.

Under the agreement, Downer will complete early works operations over two years as the mine site is established. After this initial two-year term, the operations will transition to Fortescue’s autonomous mining fleets. Downer will remain at the mine site and provide maintenance services for a further three years.

The Chief Executive Officer of Downer, Grant Fenn, said Downer was a leading provider of mining services in Australia.

“Downer has a long-standing relationship with Fortescue and we are very pleased to be expanding our services,” Mr Fenn said. “We are proud to be supporting the development of the Western Hub and the communities that will benefit from the mine.”

Downer is the leading provider of integrated services in Australia and New Zealand and customers are at the heart of everything it does. It exists to create and sustain the modern environment and its promise is to work closely with its customers to help them succeed, using world-leading insights and solutions to design, build and sustain assets, infrastructure and facilities. Downer employs approximately 56,000 people across more than 300 sites, primarily in Australia and New Zealand, but also in the Asia-Pacific region, South America and Southern Africa. It also owns 88% of Spotless Group Holdings Limited. For more information visit downergroup.com

These new road maintenance contracts by the SA Government Department of Planning, Transport and Infrastructure (DPTI) are valued at ~$420 million over a maximum term of 13 years.  The contract also has provisions for additional minor capital works. The contracts begin on 2nd November 2020 with an initial seven-year term with two extension options of three years plus three years.

This is the sort of longer term recurring revenue in transport infrastructure maintenance that attracts me to DOW [I hold DOW shares].  Additionally, they are in pole position to pick up new transport infrastructure construction work, which is coming.  Boris J over in the UK has just announced his new "Build Build Build" plan (hopefully just a working title) to stimulate the UK economy, provide employment, and drag them out of their recession.  Donald J Trump wants to do the same, although he's getting some push-back as usual, because the default position there is that anything he comes up with (or says) is probably a bad idea, based on past experience.  Hard to argue with that really.  Although this one might well be an exception.

Australia is going to need economic stimulus that is better targeted and will provide long term benefits to the country, and transport infrastructure spending - on NEW projects - is going to be a key component of that.  DOW will benefit.

As an aside, I heard comedian Ross Noble on Channel 10's "The Project" last week say the following, which I thought was particularly hilarious:

"I don’t know if you’re across this, but currently Australia is going through what scientists call the ‘Spice Girls paradigm’.

"Everyone’s trying really hard, but Victoria’s ruining it for everyone."

and:  Creating a stronger Downer and equity raising

Downer EDI Limited (Downer) announced today that Spotless Group Holdings Limited (Spotless) had accepted an offer to settle the class action commenced against Spotless in the Federal Court of Australia in May 2017.

The settlement is without admission of liability and is subject to Federal Court approval.

As a result of the settlement, if approved, the impact on Downer Group’s results for the 2020 financial year will be $35 million (pre-tax).

Spotless is 88% owned by Downer (DOW).  Spotless was an acquisition that wasn't a high point in Downer's management's track history, although not as bad as the Waratah Trains debacle.  The Waratah Trains project (for the Sydney rail network) costs blew out so much that DOW was hit with at least 3 different class actions over not keeping the market fully informed - and IMF funded 2 of those, and the third was funded by Slater & Gordon.  These were all settled in 2008, 2013 and 2016.  The 2008 one was actually over a different project - for Iluka (ILU).

DOW were clearly in the wrong, hence the settlements in every case.  They repeatedly told the market that the Waratah project was "on track" (no pun intended, much), and it clearly wasn't.  They had stopped paying suppliers due to severe cashflow issues and were in various disputes with the NSW government over delays and trains that weren't up to spec.

I normally wouldn't go near a company with such a disastrous track record, particularly when much of the management that are in place now were also in place then.  Contractors live and die by their quality and results of their risk management procedures.  Underquoting or not taking possible adverse contingencies into account (not allowing or insufficiently allowing for things that might go wrong) has turned many companies into ex-companies.  Hero to Zero.  However, Downer have survived, and I can't help but believe that they have learned some lessons from Waratah and Spotless.  I'm also not viewing them as a long-term, set-and-forget holding.  I believe they have been seriously oversold, and they look like a good short-to-medium-term-trade from here (from around $3 to $4.30/share) based on their exposure to increased fixed asset investment by state and federal governments in Australia, particularly transport infrastructure (roads, rail, bridges, overpasses, etc.) which is Downer's largest division and brings in more revenue for them than any other division.

Other options in the sector don't interest me particularly, especially CIM (CIMIC Group) because of their ownership structure (offshore controlling shareholders) and because they have an even shadier past than DOW do (CIMIC used to be Leighton Holdings).  DOW is worth a short-term punt I think.  They have debt, but nothing due this calendar year, and only 6% of their debt needs to be paid back or rolled over in CY2021, so they are not in danger of breaching any lending covenants.

They are not the best quality company out there by any stretch, but they look to be worth between 50% and 100% more than the ~$4 to ~$4.30 price they are trading at currently.  And they're not going broke any time soon.  So, the risk/reward equation looks reasonably compelling to me here.

And yes, I'm back home from hospital, with a new right hip.  Back on the trusty old desktop computer, hence the longer straws today.

That's a link to the presentation to be given at the Macquarie Australia Conference today by Downer’s Chief Executive Officer, Grant Fenn.

Looks like Downer has taken care of their debt for the next year and a bit.  Downer now has no debt maturing in the 2020 financial year or in the first half of the 2021 financial year. Debt maturing in the second half of the 2021 financial year is now less than $200 million, or just 6% of Downer’s total debt portfolio.  At 31 December 2019, Downer reported cash of $515 million and committed undrawn facilities of  $1.14 billion.  Downer Group is rated BBB (Stable) by Fitch Ratings.

I have a small position in DOW.  They are one of Australia's largest transport infrastructure players, and will benefit from any increase in government spending on road and rail infrastructure, particularly in the eastern and southern states, although Downer does work all over Australia.  I think we will see increased government infrastructure spending soon, because we need the economic stimulus to get Australia moving again, and fixed asset investment is usually a very sensible way to pump up the economy and increase growth.  China has been at it for years, and it's what got us (Australia) through the GFC relatively unscathed - as an economy.  China's stimulus got us through that time, but we may need some of our own this time.  DOW should provide good exposure to that.  My position isn't large because I'm not entirely happy with their management, and I didn't like their debt levels.  This announcement is a positive on that front.

Some of Downer's Competitors:

Cimic (CIM) and their various divisions are generally regarded as direct competitors of Downer, as are LendLease (LLC)..

Monadelphous (ASX: MND) in mining and engineering construction services, solar and wind farm construction, maintenance and operations, and especially in water infrastructure, oil & gas, and many other areas in which Downer operate.

There are plenty more.

It's not easy to identify Downer's enduring competive advantages, if they have any.  However Downer look like a reasonable sector play to me.  Their issues with Spotless Group, and prior issues with the Waratah Trains contract in NSW are just two reasons why investors might still be a little hesitant to dip their toes back in this particular pond.

While LLC (LendLease) have been moving NE at a good clip for 6 months now, CIM and DOW have just begun to be positively re-rated by the market in the past month.  There is likely more upside from here.

And I prefer DOW to CIM. 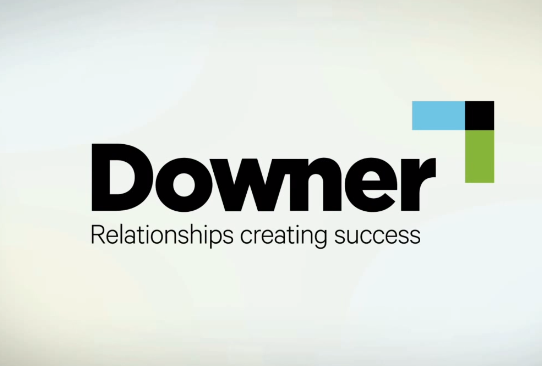